The recent tragedy this week in Charlottesville, Carolina in the USA clearly illustrates the absolute common sense in deploying portable barriers to block vehicular traffic where crowds may be at risk.

Watch the video of the incident. It’s simply frightening. The driver of the Dodge Challenger accelerates and slams into two parked cars and the many pedestrians on the road.

It’s a clear message that Police and City Authorities worldwide need to consider portable crash barriers and then deploy them at ‘at risk’ events and venues.

In this case the barriers are the Meridian Archer 1200 Rapid Defence Barriers. Note that the vehicle is stopped completely. Yes, the barriers would probably require personnel keeping a space clear behind them, but it’s obvious that the carnage that occurred in Charlottesville would have been avoided should these units have been deployed.

Now watch this video which demonstrates the simplicity and ease in which the Meridian Archer 1200 Barriers can be unloaded and deployed – with only one person if necessary.

It makes real sense to make such an investment in protecting lives. In the first video there are bollards protecting the footpaths on either side of the road. But the footage clearly demonstrates that when roads are occupied by crowds – for any reason – there is need to provide real protection from those – of any political, ideological persuasion or simply those of unstable mental capacity – who would do them harm.

The vehicle has now become one of the weapons of choice with IEDs (Improvised Explosive Devices), automatic weapons and blades. In the last year we have witnessed Nice, Berlin, Charlottesville and Melbourne being subjected to vehicular attack, generally by unstable individuals. What they do or don’t believe is irrelevant. The real challenge is to protect people as effectively as possible from death and serious injury. Mobile Rapid Defence Barriers achieve this as is evidenced in the videos presented.

AML Risk Management can deploy such crash barriers anywhere in Melbourne at short notice. The Meridian Group work to the adage of Plan, Prepare, Protect. At AML we not only agree but insist on this approach, it is the foundation of the service we provide.

It’s time to take action now. Action that is effective and timely. There are no second chances. 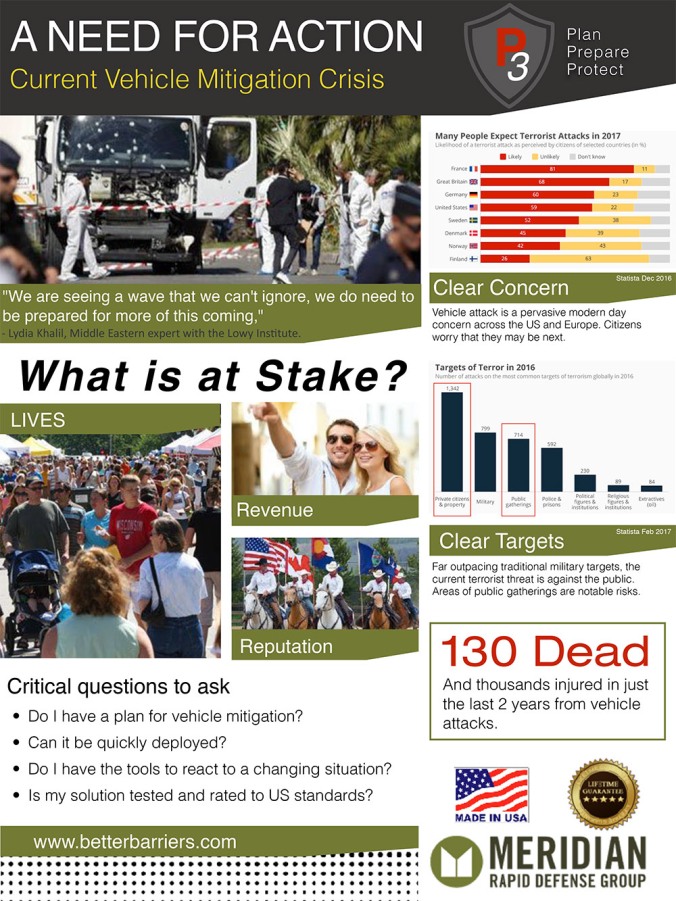